You are here: Home / Creative Child / One Of Our Favorite Topics: Helicopter Parenting! 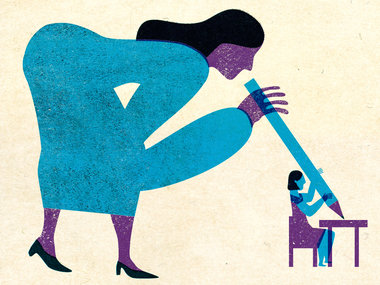 The term “helicopter parenting” has been tossed around here and there in recent years and we find it fascinating! It is amazing to us how parents can be so involved in their children’s lives that they actually create permanent, life-long confidence and self-esteem issues. A helicopter parent is one that does not let their child think for themselves and oversees every aspect of their life. Now, of course there are different ends to the spectrum, but it is shocking to see the effects of this parenting style.

We found this interesting article about how parents are raising a generation of helpless kids. Why? How? Read below to find out! Or click HERE to see the full article.

When a college freshman received a C- on her first test, she literally had a meltdown in class. Sobbing, she texted her mother who called back, demanding to talk to the professor immediately (he, of course, declined). Another mother accompanied her child on a job interview, then wondered why he didn’t get the job.

A major employer reported that during a job interview, a potential employee told him that she would have his job within 18 months. It didn’t even cross her mind that he had worked 20 years to achieve his goal.

Sadly, the stories are all true, says Tim Elmore, founder and president of a non-profit, Growing Leaders, and author of the “Habitudes®” series of books, teacher guides, DVD kits and survey courses. “Gen Y (and iY) kids born between 1984 and 2002 have grown up in an age of instant gratification. iPhones, iPads, instant messaging and immediate access to data is at their fingertips,” he says. “Their grades in school are often negotiated by parents rather than earned and they are praised for accomplishing little. They have hundreds of Facebook and Twitter ‘friends,’ but often few real connections.”

To turn the tide, Growing Leaders is working with 5,000 public schools, universities, civic organizations, sports teams and corporations across the country and internationally to help turn young people — particularly those 16 to 24 — into leaders. “We want to give them the tools they lack before they’ve gone through three marriages and several failed business ventures,” he says.

But why have parents shifted from teaching self-reliance to becoming hovering helicopter parents who want to protect their children at all costs?

“I think it began in the fall of 1982, when seven people died after taking extra-strength Tylenol laced with poison after it left the factory,” he says. Halloween was just around the corner, and parents began checking every item in the loot bags. Homemade brownies and cookies (usually the most coveted items) hit the garbage; unwrapped candy followed close behind.

That led to an obsession with their children’s safety in every aspect of their lives. Instead of letting them go outside to play, parents filled their kid’s spare time with organized activities, did their homework for them, resolved their conflicts at school with both friends and teachers, and handed out trophies for just showing up.

“These well-intentioned messages of ‘you’re special’ have come back to haunt us,” Elmore says. “We are consumed with protecting them instead of preparing them for the future. We haven’t let them fall, fail and fear. The problem is that if they don’t take risks early on like climbing the monkey bars and possibly falling off, they are fearful of every new endeavor at age 29.”

Psychologists and psychiatrists are seeing more and more young people having a quarter-life crisis and more cases of clinical depression. The reason? Young people tell them it’s because they haven’t yet made their first million or found the perfect mate.

Teachers, coaches and executives complain that Gen Y kids have short attention spans and rely on external, instead of internal motivation. The goal of Growing Leaders is to reverse the trend and help young people become more creative and self-motivated so they can rely on themselves and don’t need external motivation.

Family psychologist John Rosemond agrees. In a February 2 article in the Atlanta Journal Constitution, he points out that new research finds that rewards often backfire, producing the opposite effect of that intended. When an aggressive child is rewarded for not being aggressive for a short period of time, he is likely to repeat the bad behavior to keep the rewards coming.

Where did we go wrong?

• We’ve told our kids to dream big – and now any small act seems insignificant. In the great scheme of things, kids can’t instantly change the world. They have to take small, first steps – which seem like no progress at all to them. Nothing short of instant fame is good enough. “It’s time we tell them that doing great things starts with accomplishing small goals,” he says.

• We’ve told our kids that they are special – for no reason, even though they didn’t display excellent character or skill, and now they demand special treatment. The problem is that kids assumed they didn’t have to do anything special in order to bespecial.

• We gave our kids every comfort – and now they can’t delay gratification. And we heard the message loud and clear. We, too, pace in front of the microwave, become angry when things don’t go our way at work, rage at traffic. “Now it’s time to relay the importance of waiting for the things we want, deferring to the wishes of others and surrendering personal desires in the pursuit of something bigger than ‘me,'” Elmore says.

• We made our kid’s happiness a central goal – and now it’s difficult for them to generate happiness — the by-product of living a meaningful life. “It’s time we tell them that our goal is to enable them to discover their gifts, passions and purposes in life so they can help others. Happiness comes as a result.”

“We need to let our kids fail at 12 – which is far better than at 42,” he says. “We need to tell them the truth (with grace) that the notion of ‘you can do anything you want’ is not necessarily true.”

Kids need to align their dreams with their gifts. Every girl with a lovely voice won’t sing at the Met; every Little League baseball star won’t play for the major leagues.

• Allow them to get into trouble and accept the consequences. It’s okay to make a “C-.” Next time, they’ll try harder to make an “A”.

• Balance autonomy with responsibility. If your son borrows the car, he also has to re-fill the tank.

• Collaborate with the teacher, but don’t do the work for your child. If he fails a test, let him take the consequences.

“We need to become velvet bricks,” Elmore says, “soft on the outside and hard on the inside and allow children to fail while they are young in order to succeed when they are adults.”